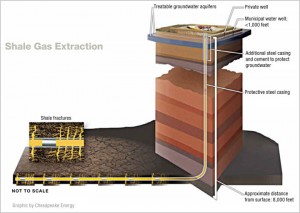 VANCOUVER, British Columbia — Hydraulic fracturing of shale formations to extract natural gas has no direct connection to reports of groundwater contamination, based on evidence reviewed in a study released Thursday by the Energy Institute at The University of Texas at Austin.

The study, released at the annual meeting of the American Association for the Advancement of Science (AAAS) in Vancouver, British Columbia, found that many problems ascribed to hydraulic fracturing are related to processes common to all oil and gas drilling operations, such as casing failures or poor cement jobs.

University researchers also concluded that many reports of contamination can be traced to above-ground spills or other mishandling of wastewater produced from shale gas drilling, rather than from hydraulic fracturing per se, said Charles “Chip” Groat, an Energy Institute associate director who led the project.

“These problems are not unique to hydraulic fracturing,” he said.

The research team examined evidence contained in reports of groundwater contamination attributed to hydraulic fracturing in three prominent shale plays — the Barnett Shale in North Texas; the Marcellus Shale in Pennsylvania, New York and portions of Appalachia; and the Haynesville Shale in western Louisiana and northeast Texas.

“Our goal was to provide policymakers a foundation for developing sensible regulations that ensure responsible shale gas development,” Groat said. “What we’ve tried to do is separate fact from fiction.”

Faculty members from across The University of Texas at Austin campus participated in the research, which the Energy Institute funded. The Environmental Defense Fund also assisted in developing the scope of work and methodology for the study. Read the complete report on the Energy Institute website.

Groat said researchers will supplement the study released Thursday with an examination of reports relating to atmospheric emissions and seismic activity attributed to hydraulic fracturing, which have emerged as significant issues of concern in recent months.

Hydraulic fracturing involves the high-pressure injection of water, sand and chemicals into a shale bed, which causes the rock to shatter, releasing natural gas. The practice has been in use for decades but has come under scrutiny in recent years from environmentalists and others who fear it poses a threat to public health.

Other findings from the Energy Institute study include:

Groat also provided an overview of two other Energy Institute initiatives related to the use of hydraulic fracturing in shale gas development.

A second project, currently under development, would include a field and laboratory investigation of whether hydrological connectivity exists between water in the units above and below the shale unit being fractured as a result of the fracturing process. As envisioned, the project calls for university researchers to conduct field sampling of hydraulic fracturing fluid, flow-back water, produced water, and water from aquifers and other geologic units within the Barnett Shale.