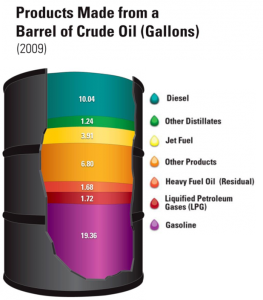 1 Million is a lot of Barrels

Bill Klesse, CEO at Valero told stockholders today that their Houston refinery is now running almost entirely on domestic crude, thanks to the sweet crude coming out of Eagle Ford. This new domestic source is also decreasing costs at the Corpus and Three rivers refineries. Three Rivers refines light sweet crude and now they can get it in their backyard.

Eagle Ford sweet crude is cheaper than than crude they used to get from West Africa.

He also predicted that gasoline prices have peaked for the same reasons – cheaper domestic crude.  After all, the cost of freighting it across the ocean is passed onto the consumer.

“No one saw this coming, and this is huge,” he said.